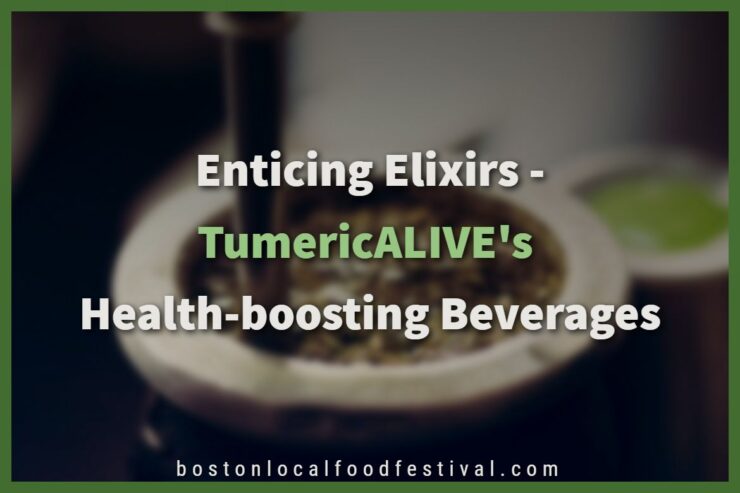 When you hear the word elixirs, what comes to mind? If you’re like me, maybe it conjures up images of a fancy potion from a fantasy movie but after learning about it, I’m seeing elixirs in a whole new light!

TumericALIVE produces cold-pressed beverages that they call elixirs which they’ve named due to the fact that these beverages aren’t just tasty, but also have functional benefits from the herbs and botanicals used to make them. They purchase as many of these ingredients (which are all non-GMO and organic) as possible from farms that are local to their processing facility in Connecticut.

The primary functional ingredient in all the elixirs is turmeric. You may be familiar with this plant, as it’s often dried into the yellow-orange spice that is used in Indian and other Asian cuisines. Curcumin is a component found in turmeric, which has been shown in research to increase the enzyme activity in the liver to break down toxins. This is probably the most well-established spice that aids in detoxification!

In addition, it is thought to possibly have anti-cancer and anti-inflammation properties, though research is still in early phases on these benefits. The American Cancer Society reports A number of studies of curcumin have shown promising results.

Curcumin can kill cancer cells in laboratory dishes and also slows the growth of the surviving cells. Curcumin has been found to reduce the development of several forms of cancer in lab animals and to shrink animal tumors. Human studies of curcumin in cancer prevention and treatment are in the very early stages.

Each 12-ounce bottle of TumericALIVE contains 10 grams of fresh, organic turmeric, along with other functional ingredients. For example, are you a runner? You can find beets alongside turmeric in the Brooklyn Beet Elixir. The dietary nitrates in beets have been shown in some studies to give runners an extra performance boost when consumed before training or an event.

Plus, as a dietitian, I like that all the bottles are less than 100 calories, and pack a punch of potassium and fiber making them a reasonable nutrient-rich addition to any meal plan.

Keep in mind, if you’re pregnant or taking certain medications, you should check with your doctor prior to drinking these elixirs through the ingredients come from plants, they can still have quite powerful effects on the body. Be sure your MD gives you the go-ahead.

As for me – I’m pretty excited about a beverage with health-boosting herbs and digestive-friendly fiber. Will you give these elixirs a try? I can’t wait to get a taste at the festival!

Bostonlocalfoodfestival.com is a participant in the Amazon Services LLC Associates Program, an affiliate advertising program designed to provide a means for sites to earn advertising fees by advertising and linking to Amazon.com.